Shopping Cart
Your Cart is Empty
Quantity:
Subtotal
Taxes
Shipping
Total
There was an error with PayPalClick here to try again

Thank you for your business!You should be receiving an order confirmation from Paypal shortly.Exit Shopping Cart

A combination of international commitments and the desire to rest other frontline players, as well as injury to the likes of captain Peter O'Mahony (hamstring) has prompted the much-altered line-up from the Champions Cup game against Racing 92 at Thomond Park last Saturday week. 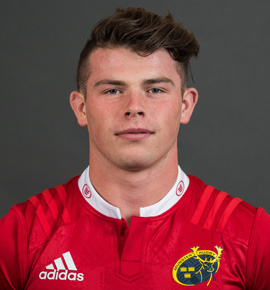 With four changes to the backline, 19-year-old Calvin Nash (above), who is in his first year of the academy, will make his debut on the wing after a string of impressive performances with Munster A and Young Munster. Fellow academy player and clubmate Dan Goggin renews his midfield partnership with Francis Saili after the pair last started against Connacht in December.

Duncan Williams is introduced at scrumhalf alongside Tyler Bleyendaal, who will captain the province for the first time, while another first sees Jaco Taute make the positional switch to fullback.

Jean Kleyn is the only player to retain this place in the pack and he is joined in the engine room by Dave Foley, who has overcome a wrist injury to gain a precious and rare start of late.

In an all-new front row, Peter McCabe makes his first start for the province next to hooker Rhys Marshall and tighthead Stephen Archer, who  will be makinghis 100th  PRO12 appearance. McCabe has returned to the province after a short loan spell with Connacht as a result of James Cronin's knee injury.

Similarly there is a fresh look to the back row  with Dave O'Callaghan, academy star Conor Oliver and Jack O'Donoghue all introduced.

Dave Kilcoyne, Billy Holland, Tommy O'Donnell and Rory Scannell have all been named in the replacements after a week in the national camp.