Endurance test for Joyce Down Under

IN DIFFERENT circumstances, Darragh Joyce (pictured) might have been hoping to join his older brother Kieran in a transitioning Kilkenny panel, and maybe get a few minutes in the pre-season Bord na Móna Walsh Cup. 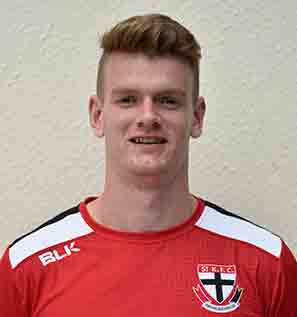 Instead, the 19-year-old is undergoing the most intense training regime he has ever encountered in the sweltering heat of an Australian summer.

Joyce had always been aware of the AFL, as his mother’s cousin, Kevin Walsh played for Essendon and earned All Australian honours.

He was invited to the AFL Europe combine in Dublin in 2014 and the following year, after helping Kilkenny win the Leinster minor title, travelled to Melbourne for the national draft. It was there that St Kilda made contact.

The Saints' list manager, Tony Elshaug, and pro scout, Wayne Hughes insisted that he spend an extra year in Ireland and enjoy a year at college before pursuing a career Down Under however, to ensure that he was certain about his decision.

That advice proved crucial and he is now working hard at Linen House Centre, having attended attended the Dublin combine in December 2015 and the IMG Academy in Florida with an Australian Institute of Sport squad, before signing a contract with St Kilda in July.

Joyce has been in Melbourne since the start of November and has found the considerable increase in endurance training taxing.

“For me, the biggest challenge has probably been the running because of my game at home – hurling is more skill based so you let the ball do the work – so it’s a big jump in the running,” Joyce told the St Kilda website saints.com.au.

“I’d be very fit for my game back home, but this is another four or five steps up and that’s the biggest thing.

“When you do that much running it’s then about getting the skills under control under fatigue, but that’s just something to keep working on.

“It’s become a 24-7 learning life, there are so many coaches around who are available; you should be improving in this environment.”

The prospect of being a professional sportsman proved too much of an attraction for Joyce to turn down, despite having always dreamed of playing senior hurling for Kilkenny. And the Rower-Inistioge product has found having recovery time one of the greatest benefits of the full-time regime.

“We’d only do half the amount of training (in Ireland) but we’d still have to go to college and work on top of that, so (being in a professional environment) it’s a nice lifestyle.

“The intensity is something else; I think they did research at home; I’d only do 35 per cent of what I’m doing over here, so it’s a big jump in the workload.

“But you’ve got so many resources, you can go for a massage, physio or jump in an ice bath; recovery is a big thing over here compared to back home where you jump straight back in the car after training and then go to bed.”